So... I had truly thought that I would be back in the recording studio by this past January.  The new songs have been ready to record for quite some time but we are still working out the last details of various logistical stuff.  It is going to happen soon though (hopefully, in June)!  To keep from getting too frustrated waiting, I decided to focus on live performance in the meantime, so over the past few months my guitarist/composer friend Tim Daoust and I have been developing acoustic versions of some of the earlier songs and taking them out to open mics around Brooklyn and NYC. 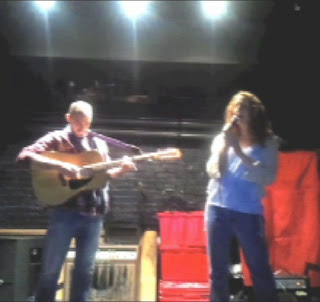 It's been a lot of fun, since I've never done acoustic versions of these songs before (except for "White Lion" which was basically written that way).  And I hadn't performed my songs live for quite some time, so I have to admit it's also been a little scary getting out there again.

I've posted a couple of these ventures below.  First is "Vengeance Is Mine" from this past Saturday at one of our favorite spots so far, Banjo Jim's.

Back in March, we performed at Abigail Brooklyn for a very small crowd of mostly comedians.  We were one of the only 2 music acts and I was afraid this crowd might not be into our music, but actually they seemed to love it (and we enjoyed the comedy too).  Here is "White Lion" from that night.

Lastly, our newest effort, again from last Saturday.  "Silverback" has been the most challenging to recreate so far, since the recorded version is based around huge, fierce big studio drumming and percussion and a wailing electric guitar solo along with various other atmospherics.  Although it took us a while, we finally arrived at a stripped down acoustic version that creates an evocative atmosphere as well.

We are still working on these versions plus several more, planning to start incorporating electronic/electric stuff and hopefully do some full gigs sometime soon.  That said... I really do expect to be in the studio any day now... so we shall see how it all works out!