journey of a song - "Today In The City" 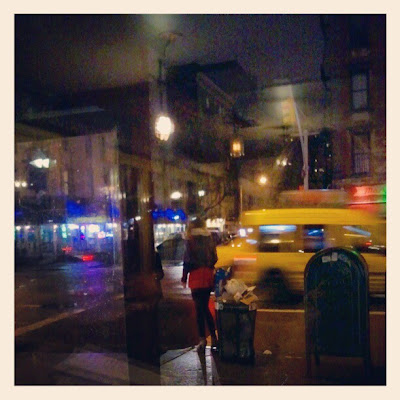 I thought I would tell the story of one of my favorite songs on the new album and how it came to be what it is. Sometimes a song ends up very differently from how you expect, and this was one of those songs.

After I had moved back to Philly a few years ago, I was going up to NYC fairly often for some dance projects and other business and I would sometimes write on the bus. One sunny morning, the lyrics for this song began to emerge on the way there. I thought of how on any given day in the city you were bound to see unpredictable and sometimes amazing things, and I think I decided that day to write down whatever I saw and see if it could be a song. I seem to remember that the children's book "And To Think That I Saw It On Mulberry Street" came across my mind. On this particular day I had two or three meetings with a lot of time in between, so I was writing in a couple of cafes and other places. When I write it's best for me to have a lot of time to be able to just sit and kind of go into a kind of meditative or contemplative state, almost like a trance, where my mind can wander and find things. On this day there was plenty of time for that, and in the course of the day I did see some strange and unexpected things that found their way into the song. I also was hanging out in a few areas of the city where certain things had happened to me in the past, so some of those found their way in as well -- although the song is poetic and not necessarily literal. It's a mix of some real things with some imagined, and the lyrics have been somewhat abstracted. I think that most of it could really be about any city, or anyone's life.

On that day I saw and remembered a mix of beautiful and horrible things. That's the intensity of the city, in that it's a microcosm of life itself. There was the awareness that time (and the city) moves on, through the beautiful and the horrible. And that life comes back again in places where death has been. And that death is always there waiting as well. It was a way of looking at the whole thing from outside of time, where any one particular event is just one of billions of events, and also recognizing the intense beauty or horror of each thing that might happen.

Once the day was over, I had a long stream of consciousness piece of writing that still needed to be crafted and made into lyrics. And somehow, I had to find a way to write music that would work with these words. I thought, who writes songs like this? And I thought of Bob Dylan's album Time Out of Mind, which I had listened to quite often when it first came out. I thought, he has a lot to say, and so when he tells those long rambling stories like "Highlands" he keeps the music very simple so that the focus will be on the story. The music itself doesn't have to be anything too fancy, and that way it won't distract. So I went back and listened to that song and a few others from that album, and I thought ok, I'll just come up with a simple repetitive kind of bluesy thing kind of like that and see how that goes.

I made something that wasn't really working so well for me but it was a start, and then as I usually do when writing, I wanted to find a sound that would represent to me the feeling of the song. I like to add in such sounds when I'm writing because it helps me continue to complete the song, when I can get some kind of atmosphere going. I found this oozy smoky kind of sound, I felt that it was kind of creeping through the song like a sort of sinister threat, it was smoky so the edges were hazy. The way that life bleeds into and across time.

Then I also needed to figure out what kind of rhythm to use. Originally I had it in 4/4, like the Dylan stuff I was remembering, but eventually I decided to see what would happen if I tried it on 3s -- and then it somehow started to get jazzy. Which was not at all what I had expected! I've recently started getting more into jazz but I really don't know much about it, and I had never really thought about writing or singing any jazz. But here it was, the song was working better in this rhythm and it really started to feel right. So, jazz! And I knew that I probably wanted a smoky sax on it, and I knew just the sound that I wanted. I'd been going to hear my friend Tom Tallitsch's band and was listening to his album Perspective, and I thought that he would bring just the right kind of sound for the song. And now that it had turned into jazz, all the more reason to bring Tom in. I was so happy that he did end up playing on this track.

It was maybe a year or so after I wrote the demo that I found my way to Turtle Studios and began production on the album with Jeff Hiatt. I think that when we started, I didn't quite realize that Jeff had such a strong background in jazz (among other genres). So when we came to lay down the basic tracks for "Today In The City", it was just so exciting for me to hear him on upright bass, with the amazing Charlie Patierno on drums, taking the song to a whole other level. The way they played the rhythm, they took it to a place where it ended up swinging, which my original really didn't. Right away I knew that I would have to take a different approach to the vocal so that was a bit scary for me! I thought, I'm not a jazz singer, I've never done that before, and I'm really not sure if I can pull this off! But I took the tracks home and was able to adjust my phrasing, and even though I don't think I really sound like a jazz singer I think it fits the song.

Another wonderful day was the session when Tony Mascara came in to lay down some vibes. I am just a sucker for ambience, so vibes and their vibes... I could listen to them all day. Tony also brought a bunch of fun junkyard-esque items to add on percussion. Having some hubcaps in there kind of made sense, and it was good to add some harder/sharper/more concise sounds to all of the oozy stuff that we had going on. 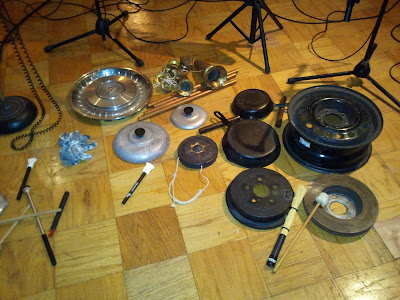 After we cut the vocal, another thought I had was that maybe I sounded a little too happy singing about some terrible things. But the vocal is more of a survival thing, a looking at things from outside and seeing life as a whole. The vocal kind of moves along, just like the instruments, through time and through all of the experiences. I guess it's just another part of the juxtaposition which runs through the song, distilling the experience of life with good and bad into one song, one city, one moment out of infinite moments.