So next week, we are booked for the very first recording session on the new album!  We'll be cutting basic tracks for the first song and I can't wait to start bringing this project to life!  What is not as exciting is that a lovely summer cold has decided this would be a great time to visit me, even though it's 102 degrees outside today.  I hardly ever get a cold but I haven't been able to sing much for the past couple of days and I'm trying to rest up and drink lots of fluids.  We probably won't end up using the vocals from this session on the final recording anyway, but the musicians need them for reference and to get the energy of the song -- and you never know when you're going to get something good.  So I'd rather be able to sing when the musicians are there!  On my first album Lovefeast we had drums, bass, guitars, percussion etc. all in the studio at the same time for "Silverback" and I had a cold then, too, and we couldn't use those vocals.  I'm really hoping that won't be the case this time but we'll work it out one way or another. 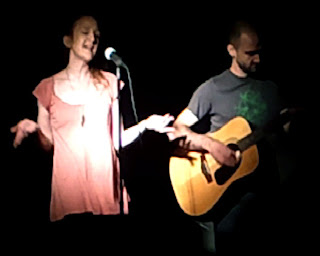 Another reason to rest is that in a couple of weeks, I'm playing a 40-minute set with Tim Daoust at one of our favorite spots, the back room of Bar 82 in the East Village of NYC.  We've been playing the way cool open mic there for a few weeks now and on Wednesday, August 3rd we'll be the featured act starting at 9pm right after the mic.  We've been performing all-acoustic so far but are aiming for a mix of acoustic and electric for this show, with lots of songs from Lovefeast plus a few other surprises.  I've really enjoyed exploring acoustic versions of the songs and I'm looking forward to doing more of that, but it's exciting to be moving into a fuller sound that's more like what's on the album.  Don't know how much time there will be for a sound check but we are ready to go with the flow whatever happens.  If you're in NYC stop on by!  There's no cover charge, and you'll get to see this: 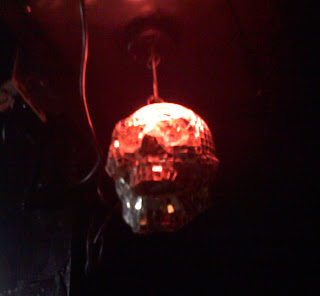 Yeah it's a disco skull.  And if you come early, you might also catch some of the wonderful artists who play the open mic here each Wednesday from 7-9pm or maybe even play something yourself (signup is at 6:30).  We'd love to see you if you can make it out!