We shot the first music video for my new album this past Saturday and Sunday with MunkyTown Productions. It was an exhausting, amazing and super fun weekend!

Of course things started long before that, with lots of planning and a Philly dance rehearsal earlier in the week, plus a whole lotta scrambling on my part to get the costumes ready in time. There was some experimental late-night dyeing involved, the results of which seem to have turned out much better than I had thought at first -- especially since the resulting colors ended up fitting amazingly well with our locations.

Once the weekend arrived, after a little more running around looking for elastic and safety pins it was off to Manhattan for a Friday night dance rehearsal that was followed by a visit from our wonderful henna artist Tanaz, who worked her magic as we continued with logistical planning. Our director and cinematographer, as well as our awesome (and awesomely patient) leading man Mughen, came to the rehearsal as well so that we could all meet each other and be ready for what was to come. Once we finally made it back to Queens, where I and another dancer were staying with longtime (and fabulous) Mereminne dancer Rebekah Kennedy, there was only time for about 3 hours' sleep before our alarms went off at 4am -- and the first day of shooting was upon us.

The goal was to meet at the director's place by 6am and then head to our first Prospect Park, Brooklyn location. Once we arrived at Mohammad's apartment I still had to adjust everyone's costumes and makeup, plus add a few more special touches which I won't reveal here so as not to spoil too much.

We then set forth into the park to shoot at several different very cool spots that Mo had scouted earlier, spending the most time at one special structure where the first dance scenes took place. On this first day we were shooting four dancers plus our leading man and all performed beautifully, despite the fact that their costumes did very little to protect them from the chill. Our locations were mostly under cover, but at least the sun was out so that they could warm up a bit in between takes!

It was a huge challenge to deter the large numbers of Saturday park-goers from wandering through our shots but we all pitched in, and hopefully there won't be too many random dogs, joggers, kids on bikes etc. in the background of this video... we shall see! We finally ended the first day of shooting around 7pm and headed home to eat, freshen up the costumes and drop into bed asap. 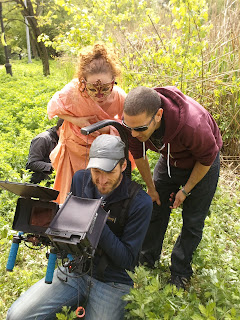 We were only in for about 3 hours of sleep that night as well, though, since we had to be up at 3:30am in order to reach our Manhattan location early the next morning. We met the rest of the dancers (5 on this day) at Big Nick's (open 23 hrs!) on the Upper West Side for a quick breakfast and makeup session, then headed to our big Central Park location. We filmed there from about 7am until 6:30pm and, as we were shooting at one of the very most popular spots in Central Park, you can probably imagine the many challenges we faced on a sunny spring Sunday in keeping our scenes clear of characters that weren't meant to be in the video! There was some kind of big race going on, along with several tour groups, a series of different street performers, and all of the other things that you might expect from the wonderful carnival of life that is NYC. We also had lots of people watching our shoot and taking pictures, so I guess that you might see some spoilers popping up online before this video comes out. The film crew from MunkyTown did a simply amazing job, and the dancers and our leading man gave wonderful performances take after take. I am very grateful that I was able to work with so many of my longtime Mereminne Dancers for this video, along with fabulous new addition Lindsay Poulis; they all did a fantastic job even with very limited rehearsal time. Most of the dancing was improvisation and I knew that I could count on these ladies to bring it... and bring it they did. 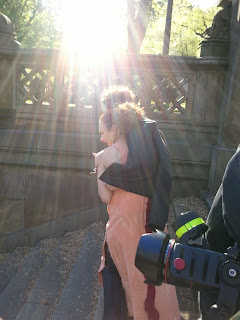 I've only been able to watch a few bits of the footage so far, but I can't wait to see the rest. We'll be editing it all sometime this month and I can't wait for you to see the end result once my album is released later this year... hopefully, this summer. But for now, I'll be washing costumes for a few days! And the title of this blog post? It will make a lot more sense soon enough!